Bot and 3rd party tool Rules:
Bots or other 3rd party tools that support auto monster select are forbidden!
Use of keypresser 3rd party tool is not allowed when AFK (leaving the character unattended)!
Violation of these rules will lead to punishments rangeing from temporary login restrictions for the account to permanent bans for all accounts that can be associated with the violating user.

Battle Arena is a team based pvp event.
Players are rewarded with Arena Coins that can be exchanged forvarious items.

Battle Arena will regularly take place every 30 minutes with a duration of 20 minutes.

· Random matching arena (8vs8): Players apply individually and randomly are
divided into 2 teams upon the start. The scale of the battle is by default
8vs8 with a minimum of 4vs4.


· Party arena (8vs8): Players gather in an Exp-Auto-Share party with
the party leader making the registration. This type is limited to 8vs8 party
battles with a minimum of 2vs2.

The registration period will start 10 minutes before the start and is closed 10 seconds before the event will take place. 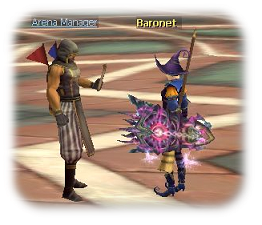 Once it starts, the players will be teleported in the arena and
automatically be divided into 2 teams: Blue Dragon and Red Lotus.

Matches can come in 2 playing modes: Capture the Flag or Point Battle. The
playing teams can get score points if the following conditions are
fulfilled.

The team with the higher score wins the battle after 20 minutes are over.
If both teams have a equal score, the match will end in a draw.

The battle will end after 20 minutes showing the result of either WIN, LOSE
or DRAW. Players are rewarded with Arena Coins according to their team’s
result and teleported back to town.

Note: Players cannot get more than 32 Arena coins (equivalent to two wins) per day from participating in the Battle Arena.

Rewards:
Speak to the Item Manager at Hotan city to exchange Arena Coins for various rewards.
Following items can be acquired with Arena Coins:

To guarantee fair gameplay during Battle Arena, please make sure to read the following rules:

• When participating in Battle Arena, please do not leave your character unattended delibaretely (AFK).
If you join Battle Arena, playing your character is required. Leaving your character unattended is
only allowed in emergeny situation when your team mates agree on it.
• Participating in BA with more than 1 character at a time is not allowed and will lead to punishments
such as login restriction for the ID.
• Please help us monitoring for a fair gameplay and contact us with a report in the following form:
o Character name,
o Date and time of the BA when it occurred,
o If possible, a screenshot that can confirm the incident.

We will investigate the issue and if required take measurements due to interference of the other player’s
gaming experience. We can’t promise to take penalty measurements to all characters that players report.